It is said that Jacques Marquette and Louis Jolliet in 1674 and Robert Cavelier de La Salle in 1679 made a traveling stop at Racine because of the strong swell on Lake Michigan that could capsize their canoes.

In his letter to the bishop of Quebec, Father Jean-François Buisson of Saint-Cosme, describes his five day journey in Racine where his team had to shelter from the dangers of rough seas. After leaving Milouakik (now Milwaukee) meaning “Pleasant countryside”, they arrived on October 11, 1698, at “Racine” or Kipikaoui in the language spoken by the Potawatomi Nation. They learned from their hosts that they needed not go through the portage of Chicagou to reach the Illinois River that flows into the Mississippi. Indeed, the Kipikaoui River (now the Root River) and a short portage of only 6.2 miles (10 km) was a shorter route. It would have brought them to the Peschoui River (now the Fox River) which is also a tributary of the Illinois River, at Ottawa, west of Chicagou.

Relying on this local information, Father Saint-Cosme and his group decided to ascend the Kipikaoui River. They navigated through pleasant meadows up to a point where the water level no longer allowed for navigation because of drought. They opined then that the waters of the Peschoui River would be equally flat, forcing the team to portage 124.3 miles (200 km) instead of 6.2 miles. As a result, they turned back and went through the longer Chicagou route instead to pursue their trip.

When Racine was incorporated in 1841, its leaders wisely returned to early American history for the city’s lovely historic name.

CAUTION dated 1698 to all travelers of Colonial French Louisiana. In relation to canoeing, Father Saint-Cosme, born in Lauzon (Québec), wrote in 1698:

“You have to be very careful along the Great Lakes, especially Lake Michigan, whose shores are very low. When the waves rise you have to get to the mainland as soon as possible, because the ripples of the waves become so high in such a short time that you run the risk of breaking your canoe and losing all its contents. Many travelers have already wrecked on the shores of Lake Michigan”.

This advice of wisdom is rightly valid today after more than 320 years. 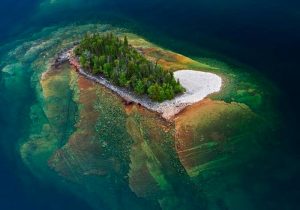